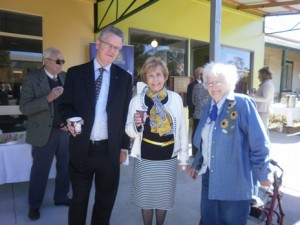 It was a hive of activity outside our Manildra Library last Friday morning (4 May) when we had the official opening of the Library it its new Derowie Street premises. It was a wonderful opportunity for us to welcome the State Librarian of NSW, Dr Alex Byrne to the Central West for his first visit in his (relatively) new role. Member for Orange, Andrew Gee also made the trip out. 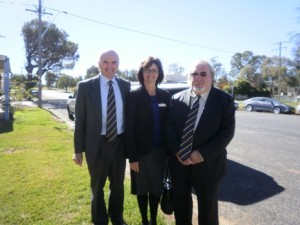 Mrs Barbara Gosper and Mrs Judy Douglas led a long community campaign to establish a branch of Central West Libraries in Manildra, a prospect which was first proposed as early as 1959. They believed that the people of Manildra needed a more significant service than that offered by the bookmobile service run from Orange.
The women held book drives to collect suitable books, held fundraising functions to purchase more books and established a Friends of the Library Group as well as writing countless letters to Cabonne Council and Central West Libraries (then known as Central Western Cooperative Public Library). 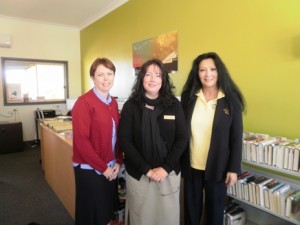 Their determination and the support of the Manildra community were rewarded when the Manildra Branch was officially opened by the Library’s Chairman, Cr L. M. (Max) Stapleton on 26 April 1989. It was located in a room in Manildra House which also housed the Manildra Craft Cottage.

Following the deaths of Mrs Douglas (2005) and Mrs Gosper (2009) Cabonne Council determined to relocate the Library to the shop front location in Derowie Street and undertook refurbishment of the space. The Library opened in this location in late 2011. The contribution of these marvellous ladies was recognised at the opening and it was great to have members of their family with us for the celebration.

We also used the occasion to launch the Library’s Manildra Memories blog which can be explored from our web site. This project was started by Mrs Gosper in 2007 and is a fitting tribute to her dedication.