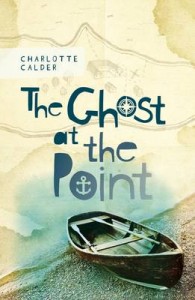 The Ghost at the Point Book by Charlotte Calder

From acclaimed author Charlotte Calder comes a thrilling historical mystery to make your spine tingle to be launched with a wonderful event for young readers at Orange City Library.

In her new book The Ghost at the Point Dorrie wonders if Aunt Gertrude’s stories are true. Is there really a ghost boy roaming the cliffs? The thought makes her shudder. But how else can she explain the shadowy figure she glimpsed moving through the stringybarks? And the other strange happenings around the point? Dorrie is determined to discover the truth – even if it means confronting a ghost.

Charlotte Calder was born in Adelaide and has worked as an actor, photographer and occasional newspaper columnist. Her first novel for young adults was Settling Storms (2000), followed by Cupid Painted Blind (2002), Surviving Amber (2005) and Paper Alice (2008). Stuck! her first picture book was short-listed in the Young Children Category of the Speech Pathology Australia Book of the Year Awards 2010, and received a notable mention in the Picture Book Category, Children’s Book Council of Australia Awards, 2010. Charlotte lives with her husband and three children (when they are home) near Orange, in the Central West of NSW.
Come along to help launch Charlotte’s new book at Orange City Library:

The Ghost at the Point
Orange City Library
147 Byng Street, Orange
Wednesday 13 June at 4pm
Includes a special performance by St Mary’s Primary School students
Parents and siblings are welcome to come along
Please RSVP to the Library on 6393 8132.