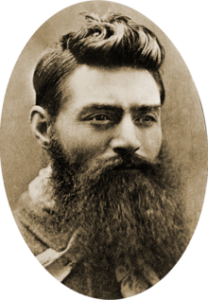 Bushranger Ned Kelly is being buried today in Greta, Victoria at the same cemetery where his beloved mother Ellen lies. A private funeral is being held after his body was officially identified in a mass prison grave. Kelly was hanged for murder following a dramatic showdown with police in 1880 at Glenrowan VIC where he wore home-made metal armour.

If you are interested in learning more about the Kelly legend then check out our resources, there’s lots to discover and help make up your own mind – was he a villain or a hero.

We’ll also be hosting an author talk with Noelene Allen who has written a fascinating biography of Ellen Kelly titled Ellen… A Woman of Spirit in a few months time.  The book sheds light on Ned’s early life, his family including sister Kate who later died in Forbes NSW, the loss of his father at a young age, his school days, brushes with the law and Royal Commission. Subscribe to our blog to keep up to date with the latest news and events.