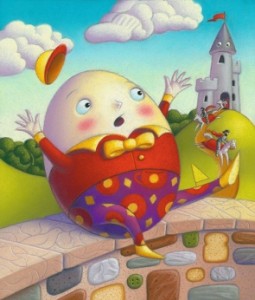 Humpty Dumpty had a great fall ... then what

Thank you to everyone who joined in the storytelling fun of our Summer Reading Club Finale.  Children read out their new endings for classic fairytales and we’ll feature them right here on our blog.  First up is a gourmet end for the famous egg on the wall…………

So we know the fate of Humpty Dumpty but there’s a different ending rather than the one we all know…..so after he fell and all the kings men could put him back together, but the reason he fell was because the egg was trying to escape from prison.  The egg was left on the ground, his yolk running from his head with blood, as people walked by they added ingredients to his yolk and stirred him together to make the world’s largest omelette.  And then they left it to cook in the sun. After he was cooked to perfection they ate him.  So from then Humpty Dumpty haunted all those who ate him except for his best friend – Puss in Boots.