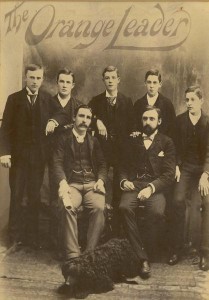 The National Library of Australia has just announced that there are now TEN MILLION historic Australian newspaper pages available in Trove! The lucky edition is the Saturday July 31, 1915 issue of The Leader, from our own city of Orange. The National Library is also celebrating the milestone of almost ONE HUNDRED MILLION articles within those pages which can be individually searched and referenced.

The digitisation of The Leader is part of a grant project that we’ve been working on with the National Library of Australia and the State Library of New South Wales. It was made possible by a $94,000 Country Libraries Grant from the NSW Government. Ros Dorsman has very ably led the project on our behalf. We’re overjoyed that one of our papers was the 10 millionth, for us it’s almost as good as winning the lottery.