Marilyn’s book offers an in depth expose of how wrongful control can creep into a relationship and develop into emotional-psychological abuse.

“Walking on Eggshells – a guide for women to identify emotional, psychological abuse in relationships” is both interesting and informative and a valuable tool to help women reach their potential. Find out more at Orange City Library on Tuesday 6th May from 5.30pm.

Anzac Day commemorates the landing of the Australian and New Zealand Army Corps (ANZAC) soldiers at a small cove on the Gallipoli Peninsula in Turkey, on 25 April 1915.

When World War One broke out in 1914, Australia had been a federal commonwealth for just 13 years and was eager to establish its standing among the nations of the world. Newly elected Labor Prime Minister, Andrew Fisher, pledged 20,000 Australian troops to support Britain in the war. These men formed the Australian Imperial Force (AIF) and became part of the proposed Gallipoli campaign, the aim of which was to capture the Gallipoli peninsula and open the Dardanelles, thus uniting the Allies and providing access to the Turkish capital, Constantinople.

Read more about the 1,816 servicemen and women who signed up from Orange and the surrounding district on our WWI  blog http://www.centenaryww1orange.com.au/

We will remember them

People’s Choice – Weight of the World on my shoulder

Causes worth fighting for 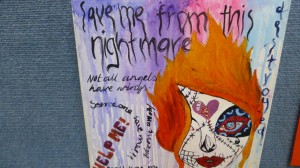 Save me from this nightmare

The people have voted and the results are in…. Congratulations to Tyla for “the Weight of the Word on my Shoulder” acrylic on canvas painting that took out the People’s No 1 Choice in the Youth Week Art Display held at Orange City Library. Well done to Krittiyanee from Orange High for her artwork “Save me from this nightmare” gaining 2nd place in the People’s Choice and Lucy, also from Orange High,  for her artwork with the opening line “Sometime the causes most worth fighting for are the ones you don’t think you can win”. Congrats to all involved.

Shakespeare was born in Stratford-upon-Avon, Warwickshire, in 1564 on 23 April . Very little is known about his life, but by 1592 he was in London working as an actor and a dramatist. Between about 1590 and 1613, Shakespeare wrote at least 37 plays and collaborated on several more. Many of these plays were very successful both at court and in the public playhouses. In 1613, Shakespeare retired from the theatre and returned to Stratford-upon-Avon. He died and was buried there in 1616.

Shakespeare wrote plays and poems. His plays were comedies, histories and tragedies. His 17 comedies include A Midsummer Night’s Dream and The Merry Wives of Windsor. Among his 10 history plays are Henry V and Richard III. The most famous among his 10 tragedies are Hamlet, Othello, and King Lear. Shakespeare’s best-known poems are The Sonnets, first published in 1609. Happy 450th William!

Yesterday we were excited to receive a small booklet called The Library Flame. Created by Bournemouth Libraries in Dorset, UK, it was conceived as part of the Holocaust Memorial Day 2014 and reflects this year’s theme of ‘Journeys’. This little book was sent out to the world of public libraries with a request for each library to add its stamp and pass it on. END_OF_DOCUMENT_TOKEN_TO_BE_REPLACED