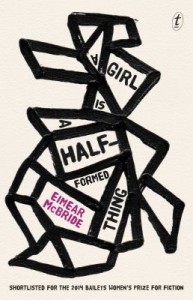 The Irish writer Eimear McBride has won the Baileys book prize for her first novel, A Girl is a Half-formed Thing.  McBride’s dark family tale, written in the hurtling, comma-free voice of an unnamed narrator, won over the judges of the women’s prize for fiction, formerly the Orange prize.

McBride had accumulated a hefty pile of rejection slips, and the manuscript had gone into the back of a drawer, when a conversation between her theatre director husband and a bookshop owner in their adopted home city, Norwich, led to its becoming one of the launch titles of the small independent press Galley Beggar.

This  incredible debut novel tells, with astonishing insight and in brutal detail,
the story of a young woman’s relationship with her brother, and the long shadow
cast by his childhood brain tumour. Not so much a stream of consciousness, as
an unconscious railing against a life that makes little sense.