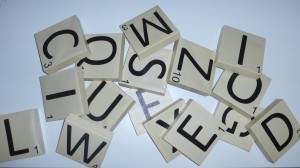 What do Madonna, Martha Stewart, Barack Obama, Bill and Hillary Clinton, Keanu Reeves and Queen Elizabeth II have in common? They all love Scrabble.

In 1931 American Alfred Butts translated his lifelong love of crossword puzzles into a board game.   It wasn’t until 1948 that the game was mass produced and the rest is well, history. It is now the world’s leading board game. Now more than 150 million games have been sold in 121 countries around the world.

For this school holidays Orange City Library has planned a game of scrabble with a giant twist. The letters will be larger than the usual letter tiles and children will play in teams.