Wednesday 19 November 2014
Michelle de Kretser, the acclaimed author of the multi-award-winning novel Questions of Travel was in conversation with Orange City Librarian Sean Brady.  Michelle spoke about the story behind her book – the characters and themes of travel, work, communication, love and loneliness.  Michelle also spoke about her new novella, a ghost story called Springtime.  Michelle surprised 3 lucky ladies when she gave out copies of her book. 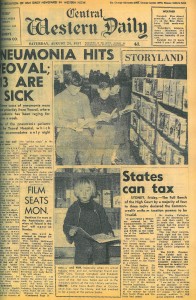