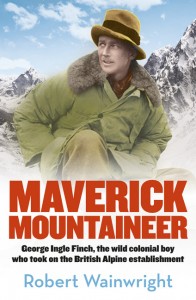 Former SMH journalist Robert Wainwright launches ‘Maverick Mountaineer’,  his biography of George Ingle Finch.  George grew up in Orange in the 1890’s and was the father of actor Peter Finch.  Mountaineer, soldier, scientist, rebellious spirit, boy from the bush and in his day one of the most famous men in the world.   In 1922 he stood at the highest point on Everest, a feat not bettered for 30 years. He invented the predecessor to the puffer jacket and pioneered the use of oxygen in climbing. A World War I hero and so much more …..Come along to Orange City Library on Tues 9th June at 5.30pm for the author talk. Supported by Boomers Bookshop.