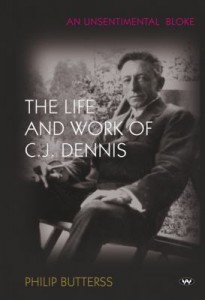 The extraordinary biography of poet CJ Dennis titled An Unsentimental Bloke by Philip Butterss has won the $25,000 National Biography Award.

The Sentimental Bloke and Doreen are famous characters in Australian popular culture, but their creator deserves to be better known. C J Dennis transformed the larrikin from a street thug into a respectable image of Australian identity, and helped shape the Anzac legend.

Many people regarded Dennis himself as a sentimental bloke, but this book shows he was a much more complex and sometimes darker personality – not only examining his humorous and lovable side, but also his struggles with alcohol and depression, his political activism, his marriage and his financial dealings.