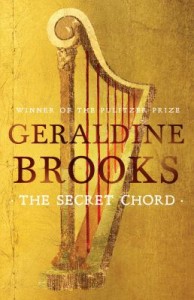 Pageturners read The Secret Chord by Geraldine Brooks for the next meeting to be held on Wednesday 9 December.

Described as a “unique and vivid novel that retells the story of King David’s extraordinary rise to power and fall from grace. A skilful reimagining … gracefully and intelligently told.” – Kirkus Reviews.

1000 BC. The Second Iron Age. The time of King David. Anointed as the chosen one when just a young shepherd boy, David will rise to be king, grasping the throne and establishing his empire. But his journey is a tumultuous one and the consequences of his choices will resound for generations.