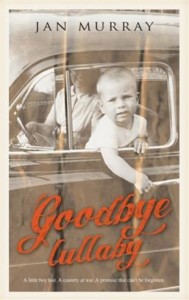 In September 1971, 181 numbered marbles roll around in a barrel while Australia holds its breath. The last number drawn will shatter two women’s lives, and bring them together again…

Sixteen-year-old Caroline ‘Miki’ Patrick confides to her best friend — the outspoken, smart-mouthed Jude — that she’s pregnant. Miki’s parents place her in the iron embrace of St Anthony’s, a home for wayward girls, with the scheming Sister Angela pressuring her to give up her baby. But Jude convinces Miki they can raise the child, and together they make a pact and take to the road. But ultimately Dominic is surrendered to the home.

Two decades later, Miki is a dangerous woman, and she’s on the run. A vocal anti-war activist who assists draft dodgers, Miki is hiding from the Federal Police and never stays in one place very long. That is, until Dominic’s birthday is drawn in the conscription lottery and Jude steps back into her life. Now Miki and Jude will stop at nothing to be reunited with him. Goodbye Lullaby by Jan Murray is another great book club read.