Storyteller Nicholas with the Monster 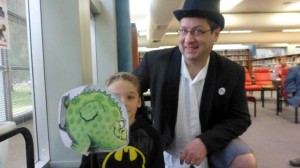 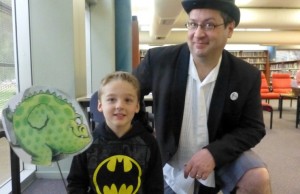 Caleb who played the Monster with Storyteller Michael 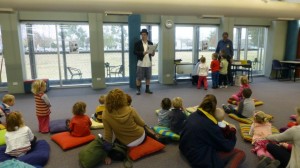 Nicholas starts to tell HIS story 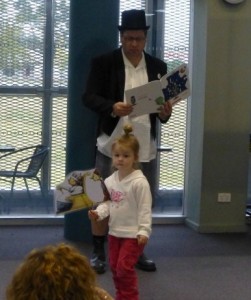 Maggie plays the Queen who walks into the wrong story 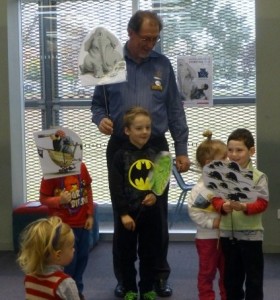 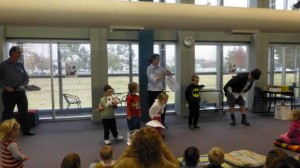 Everyone takes a bow

Thumbs up from Storyteller Nicholas (aka Library team member Michael)

Thank you to our “stars” for taking part in National Simultaneous Storytime featuring Nick Bland’s story The Wrong Book about a a boy called Nicholas trying to tell his own story when an elephant, monster, pirate, Queen, rats and puppets interrupt.  It made Nicholas most upset. Much to the delight of the audience who called out with Nicholas everytime – “You are in the Wrong Book!” Congratulations Peter, Caleb, Bailey,  Maggie, William, Fiona and our guest storyteller Nicholas (aka library staffer Michael). Happy reading everyone!

National Simultaneous Storytime Wed 22 May 11am

Connect with everyone around the country when we read the same children’s story at the
same time for National Simultaneous Storytime on Wednesday 22 May at 11am during Library and Information Week. We will be reading Nick Bland’s delightful story The Wrong Book.

It’s about a little boy called Nicholas Ickle trying to tell a story, but he keeps
getting interrupted by characters from other stories – a pirate, a queen, even
some monsters! To get a chance to tell his story, he has to convince the others
that they are in the wrong book…….

National Simultaneous Storytime is an important annual campaign that aims to encourage
more young Australians to read and enjoy books. Now in its 13th successful year,
it is fun event that aims to promote the value of reading and literacy using an Australian children’s book that explores age appropriate themes and addresses key learning areas of the National Curriculum for Grades 1 to 6. Enjoy!

Andrew Tink will visit later in the year

Our event with Andrew Tink about William Charles Wentworth planned for Monday 20th May has now been postponed.
Thank you to everyone who supported this event, we plan to re-schedule Andrew’s visit for later in the year.

This year marks the bicentenary of the first crossing of the Blue Mountains by explorers Blaxland, Lawson and Wentworth. As part of the National Trust Heritage Festival Community Milestones celebrations, we invite you to meet author Andrew Tink when he talks about his book William Charles Wentworth. Andrew Tink was shadow attorney-general and shadow leader of the House in the New South Wales Parliament until March 2006. Since stepping back from politics Andrew has concentrated on two of his great passions: writing and history. His book William Charles Wentworth is the first comprehensive biography of Wentworth.

Wentworth built up a property empire and his pastoral vision included purchasing land at Lucknow in the 1830s. This was where the Wentworth Mine shaft and poppet head, along with the rest of the Lucknow gold mining field, was later established. An explorer, a master political manipulator, a barrister, a newspaper proprietor and a physical giant of a man who was afraid of nothing and no one, William Charles Wentworth was in every sense Australia’s founding father. His story is the story of colonial Australia.