The National Library of Australia has just announced that there are now TEN MILLION historic Australian newspaper pages available in Trove! The lucky edition is the Saturday July 31, 1915 issue of The Leader, from our own city of Orange. The National Library is also celebrating the milestone of almost ONE HUNDRED MILLION articles within those pages which can be individually searched and referenced.

The digitisation of The Leader is part of a grant project that we’ve been working on with the National Library of Australia and the State Library of New South Wales. It was made possible by a $94,000 Country Libraries Grant from the NSW Government. Ros Dorsman has very ably led the project on our behalf. We’re overjoyed that one of our papers was the 10 millionth, for us it’s almost as good as winning the lottery.

The Public House or Pub for short, has played a significant part in the development of Australia. Pubs thrived in the Central West due to the discovery of payable gold at Ophir in 1851. Be among the first to join in a walking tour of Orange’s historic pubs on Sunday 4th August at 10.30am. This event will launch Orange City Council’s latest heritage walking trail brochure as part of Frost Fest celebrations. Discover some of the yarns of yesteryear and you’ll never know who you will meet along the way.

Tickets are $35 for adults and $15 for children and includes lunch at Kelly’s Rugby Hotel.  Bookings and payment essential at Orange City Library. Ph 6393 8132

Knitting and Sewing Skills Required for Wrap With Love Charity

The weather forecast is for 10 degrees but it feels like about 5. So what better excuse is there to get knitting and sewing?  We’ve set a up a knitting nook in Orange City Library with wool, needles and squares started to help you create Wraps for charity.  We also have knitting instructions and bags of knitted squares ready to collect if you like to take them home and sew them together into a rug.  It is all part of the annual ABC Local Radio KNIT IN event that runs until 4th August.

The Library is also a drop off point for knitted squares during this time.  Donations of wool (8ply yarn) and knitting needles (4mm) would be much appreciated.

There are millions of people in the world suffering extreme cold. In 1992 Wrap with Love began with the idea to help as many people as possible by providing warm wraps to ward off hypothermia and in the past 20 years they have sent more than 300,000 wraps to people in over 75 countries, including Australia, with the help of hardworking and generous volunteers. Last year thousands of wraps were sent to Africa, Argentina, Armenia, Congo, East Timor, Ghana, Madagascar, Mongolia, Nepal, Philippines, Thailand and Uganda. The photo, courtesy Wrap with Love, shows rugs being distributed in Port Moresby, New Guinea.

Blayney Classics Book Club to Talk About The Grapes of Wrath

Blayney Classics Book Club meets on the third Tuesday of the month from 11am – 12 noon.  The next meeting will be held on Tuesday 18 June to talk about The Grapes of Wrath by John Steinbeck:

The Grapes of Wrath is an American realist novel written by John Steinbeck and published in 1939. For it he won the annual National Book Award and Pulitzer Prize for novels and it was cited prominently when he won the Nobel Prize in 1962.

John Steinbeck’s The Grapes of Wrath is not merely a great American novel. It is also a significant event in their national history. Capturing the plight of millions of Americans whose lives had been crushed by the Dust Bowl and the Great Depression, Steinbeck awakened the nation’s comprehension and compassion. Interested people are most welcome to come along and join the discussion.

Orange Evening Classics Book Club meets on third Thursday of the month from 5.30pm – 7pm at Orange City Library. The next meeting will be held on Thursday 20th June to talk about The Sheep-Pig by Dick King-Smith and the successful film Babe. You are most welcome to come along and join in the conversation. The Sheep-Pig is one of the Dick King-Smith’s most famous tales.  It shot to further fame when the film adaptation, Babe was released in 1995 and was a world-wide box office success. “Why can’t I learn to be a Sheep-Pig?”  When Babe, an orphaned piglet, is won at a Fair by Farmer Hogget, he is adopted by Fly, the kind-hearted sheep-dog.  Babe is determined to learn everything he can from Fly.  He knows he can’t be a sheep-dog. But maybe, just maybe he might be a sheep-pig… 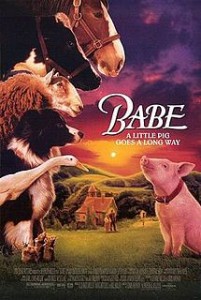