Blayney Classics Book Club to Talk About The Grapes of Wrath

Blayney Classics Book Club meets on the third Tuesday of the month from 11am – 12 noon.  The next meeting will be held on Tuesday 18 June to talk about The Grapes of Wrath by John Steinbeck: 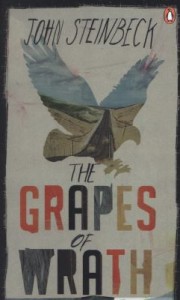 The Grapes of Wrath is an American realist novel written by John Steinbeck and published in 1939. For it he won the annual National Book Award and Pulitzer Prize for novels and it was cited prominently when he won the Nobel Prize in 1962.

John Steinbeck’s The Grapes of Wrath is not merely a great American novel. It is also a significant event in their national history. Capturing the plight of millions of Americans whose lives had been crushed by the Dust Bowl and the Great Depression, Steinbeck awakened the nation’s comprehension and compassion. Interested people are most welcome to come along and join the discussion.