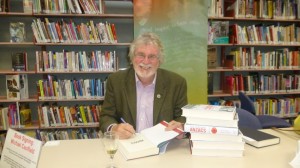 A crowd of more than 80 well wishers helped Michael Caulfield launch his latest book The Unknown ANZACS at Orange City Library. In his speech Michael acknowledged former Orange City Librarian, the late Elizabeth Barry, and said he would like to think that she would appreciate the book because it starts off with a Librarian collecting diaries, journals and photos from ex-servicemen.

He explained the diaries have been locked up for some time and the stories needed to be told. Michael then went on to give a sense of these ANZACS by reading out selected anecdotes from the diaries chosen for the book – some poignant, some amusing and some using strong language. Many thanks to all those who came along and Congratulations!! to Michael on his latest work.