Pageturners book discussion group’s next meeting will be held on Wednesday 10th August from 5.30pm to discuss the life and works of H.G. Wells. All interested people are most welcome to attend. 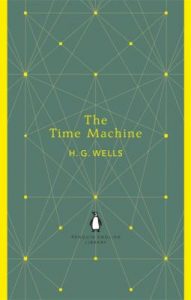 “Chilling, prophetic and hugely influential, The time machine sees a Victorian scientist propel himself into the year 802,701 AD, where he is delighted to find that suffering has been replaced by beauty and contentment in the form of the Eloi, an elfin species descended from man. But he soon realizes that they are simply remnants of a once-great culture – now weak and living in terror of the sinister Morlocks lurking in the deep tunnels, who threaten his very return home. H. G. Wells defined much of modern science fiction with this 1895 tale of time travel, which questions humanity, society, and our place on Earth.”

The War of the Worlds

“The night after a shooting star is seen streaking across the sky, a cylinder is discovered near London. Armed with just a white flag, the locals approach the mysterious object ? only to be burned alive by heat-rays as horrific, tentacled invaders emerge. Soon, the whole of human civilization is under threat, as powerful Martians move across the land in massive killing machines, armed with black gas and burning rays. The aliens are determined to win the Earth for themselves.”