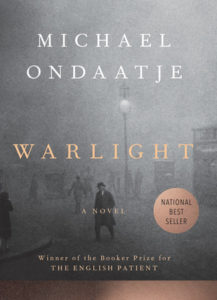 From the internationally acclaimed, best-selling author of The English Patient:a mesmerising new novel – Warlight –  from Michael Ondaatje tells a dramatic story set in the decade after World War II through the lives of a small group of unexpected characters and two teenagers whose lives are indelibly shaped by their unwitting involvement. This is the book to talk about at Pageturners Book Discussion Group meeting on Wednesday 12th September at 5.30pm. For more on Pageturners check out the Pageturners Blog.

Michael Ondaatje is the author of several award-winning novels, as well as a memoir, a nonfiction book on film, and several books of poetry. Among other accolades, his novel The English Patient won the Booker Prize in 1992 and the Golden Man Booker in 2018; Anil’s Ghost won the Irish Times International Fiction Prize, the Giller prize, and the Prix Médicis. Born in Sri Lanka, Michael Ondaatje lives in Toronto, Canada.