Posted on 7 September 2020 by jvidler 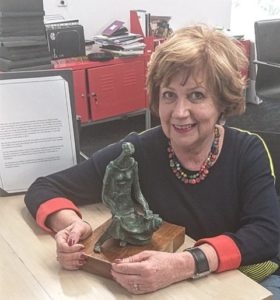 The Australian Library and Information Association (ALIA) has presented the prestigious HCL Anderson Award to Jan Richards AM FALIA (CP) in recognition of her outstanding service to the industry, domestically and internationally.

In addition to her role as Manager, Central West Libraries, NSW, she is also Chair of the ALIA Public Libraries Advisory Committee; former Chair of the IFLA Standing Committee on Public Libraries; and a member of the Library Council of New South Wales. Jan Richards was to be presented the award at ALIA National 2020 Conference but due to COVID-19 this event was cancelled.

The HCL Anderson Award is the Association’s highest honour that can be bestowed on an Associate Member of ALIA. The award commemorates HCL Anderson, principal librarian of the Free Public Library of New South Wales, 1893–1906. Anderson created a collection and service policy to give his infant colonial library a stature of national importance.

Congratulations to Jan on this incredible achievement.

Posted in About Us, ALIA, Awards, News. | Leave a Comment