A large crowd enjoyed learning more about the men and women of WWI at the Orange and District Historical Society History Alive Talk held on Wednesday night. Librarian Trudi Mayfield showed guests the WWI Blog, outlined research behind some of the stories including the youngest enlisted recruit from Orange Ernest Powter who signed up at age 15. Fellow guest speaker local author Michael Caulfield spoke about the research undertaken for his book The Unknown ANZACS and the importance of recording our history. Thank you to everyone who came along.

WWI veterans march during the 1967 ANZAC Day Parade in Orange.

Special guests at tonight’s (Wednesday 27 August) Orange and District Historical Society monthly History Alive Talk are Central West Libraries Librarian Trudi Mayfield and local author of The Unknown ANZACS Michael Caulfield. The topic is WWI and Trudi will talk about her ongoing research for the Centenary of WWI in Orange website which showcases the stories of men and women from the district who enlisted and served in WWI. Visit the website: http://www.centenaryww1orange.com.au/

The WWI History Talk will be held at the Orange Senior Citizens Centre (entry from Woolworths carpark) at 7pm for 7.30pm start. Light refreshments will be served with a $5 entry fee to cover costs. To RSVP please call 6362 8647.

Orange and District Historical Society is featuring an exhibition about the Dalton family, their store and flour mills in Orange, their vast pastoral holdings throughout western NSW, their import/export business in Sydney, their support of the Catholic Church, and their strong allegiance to the Irish cause for independence from Britain.

The exhibition will be at Duntryleague (pictured below – formerly the home of James Dalton and his large family) Woodward Street, Orange, from 10am-4pm until Sunday, November 17. Entry is $5 for adults and $3 for school children. 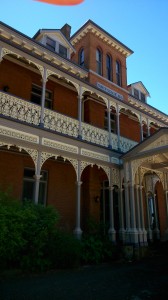 Rolling through the years skating display - tell us your skating stories

Roller skating is back in vogue with a Roller Derby League established in Orange. Maybe you grew up roller skating? To highlight Orange's love of the sport, the Orange and District Historical Society has prepared a display on Roller Skating – Rolling through the years – on show at Orange City Library. The roller skating memorabillia is on loan from Mrs Lorraine Ashbrooke. The memorabilia illustrates many people in Orange once enjoyed the sport and participated in dances, hockey and long distance skating. Orange resident Mervyn Herbert 'Jack” Thomas held the NSW Fast Skating Championship title for the distance of a quarter of a mile at the age of 13. See the trophies, ribbons and 1930's era skates. We also want to hear about your skating stories, just click on the comments box to add them here.

Orange celebrated 150 years of service to the community last night with a special council meeting held at the historic town hall. The meeting marked 150 years – to the day – the formation of the Municipal Council of Orange. Orange and District Historical Society's Elizabeth Griffin gave an informative presentation with anecdotes (including that some meetings were later held at the Carrington Hotel). The press of the day reported “the councillors re-entered the court house with John Peisley Esq as their first chairman who was received with reiterated plaudits of the assembly. A general explanation of peace making followed and the party adjourned to Mr Councillor Hanrahan's Wellington Inn where mutual expressions and happy toast followed in rapid succession during a merry hour.” The Central Western Daily is publishing a feature each month tracing the city's development. To read about our first council check out the article:
http://www.centralwesterndaily.com.au/news/local/news/general/a-municipality-is-born/1754383.aspx