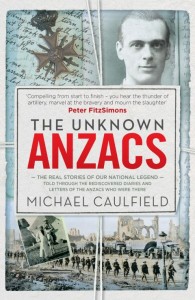 Local author Michael Caulfield is launching his latest book The Unknown ANZACS at Orange City Library on Wednesday 20 November at 5.30pm. It is a raw, fresh and utterly authentic portrait of Australians fighting and living on Gallipoli, the Western Front and life behind the lines in the UK, France, Belgium and Egypt.

‘We have been told of the impossible task before us, of probable annihilation; yet we are eager to get to it; we joke with each other about getting cold feet, but deep down in our hearts we know when we get to it we will not be found wanting … for the last time in this world many of us stand shoulder to shoulder.’ Signaller Ellis Silas, 16th Battalion, AIF

We think we know about the Anzacs who they were and what they endured amidst the horror of World War I. But do we really? Have they told us their own stories? In the Mitchell Library in Sydney is a unique collection of their diaries nearly a thousand of them. Some written by those who came back, and some by those who didn’t make it … From Gallipoli to the Western Front, from the mud and blood of Flanders to the brothels of Cairo, Michael Caulfield weaves these stories together in an unforgettable portrait of a young country at war. This is the Anzac story as you’ve never read it before graphic, emotional and inspiring.

Michael Caulfield has been a composer, musician, and TV and film producer and director, both in Australia and overseas. He was the producer of the ABC TV series Australians at War, and Executive Producer of the Nine Network’s In Their Footsteps. His previous books are War Behind the Wire, The Vietnam Years and Voices of War.